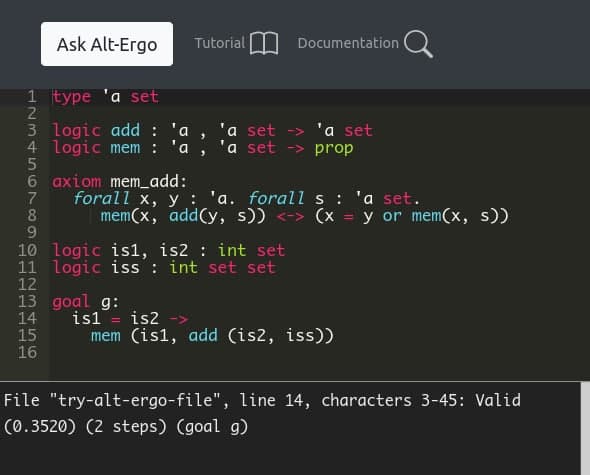 Have you heard about our Try-Alt-Ergo website? Created in 2014 (see our blogpost), the first objective was to facilitate access to our performant SMT Solver Alt-Ergo. Try-Alt-Ergo allows you to write and run your problems in your browser without any server computation.

This playground website has been maintained by OCamlPro for many years, and it's high time to bring it back to life with new updates. We are therefore pleased to announce the new version of the Try-Alt-Ergo website! In this article, we will first explain what has changed in the back end, and what you can use if you are interested in running your own version of Alt-Ergo on a website, or in an application! And then we will focus on the new front-end of our website, from its interface to its features through its tutorial about the program.* * 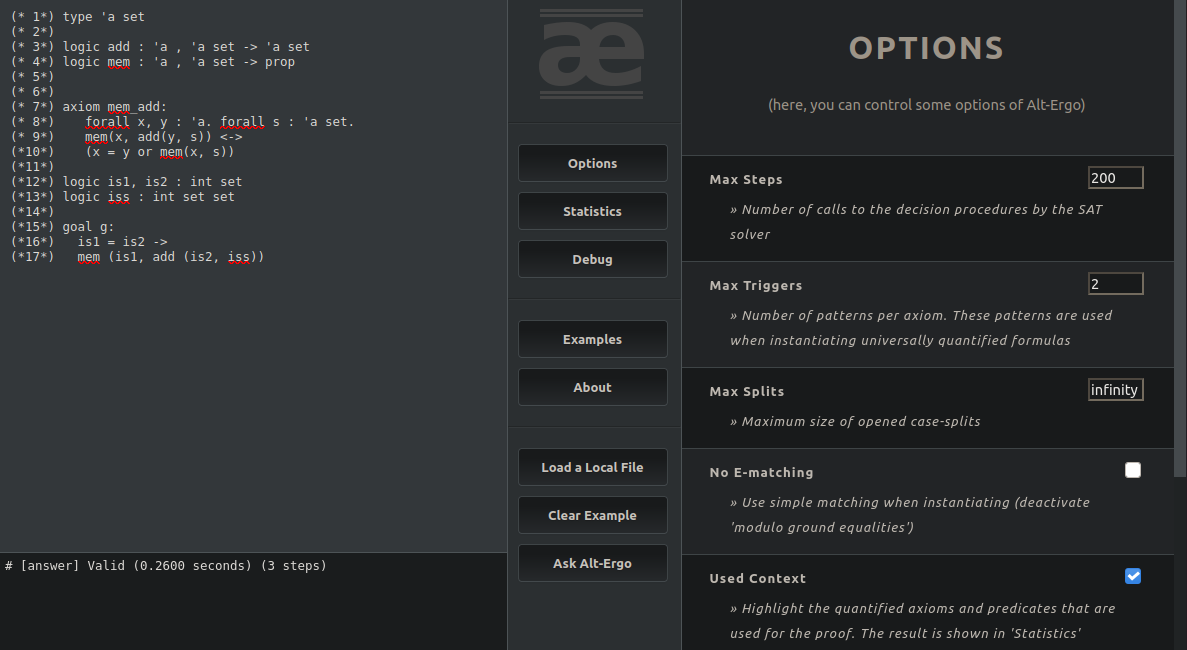 Try-Alt-Ergo was designed to be a powerful and simple tool to use. Its interface was minimalist. It offered three panels, one panel (left) with a text area containing the problem to prove. The centered panel was composed of a button to run Alt-Ergo, load examples, set options. The right panel showed these options, examples and other information. This design lacked some features that have been added to our solver through the years. Features such as models (counter-examples), unsat-core, more options and debug information was missing in this version.

Try-Alt-Ergo did not offer a proper editor (with syntax coloration), a way to save the file problem nor an option to limit the run of the solver with a time limit. Another issue was about the thread. When the solver was called the webpage froze, that behavior was problematic in case of the long run because there was no way to stop the solver.

The 1.30 version of Alt-Ergo was the version used in the back-end to prove problems. Since this version, a lot of improvements have been done in Alt-Ergo. To learn more about these improvements, see our changelog in the documentation.

In 2019 we switched our build system to dune which opens the possibility to ease the cross-compilation of Alt-Ergo in JavaScript.

With some simple modification, we were able to compile Alt-Ergo in JavaScript. This modification is simple enough that this process is now automated in our continuous integration. This will enable us to easily provide a JavaScript version of our Solver for each future version.

Two ways of using our solver in JavaScript are available: 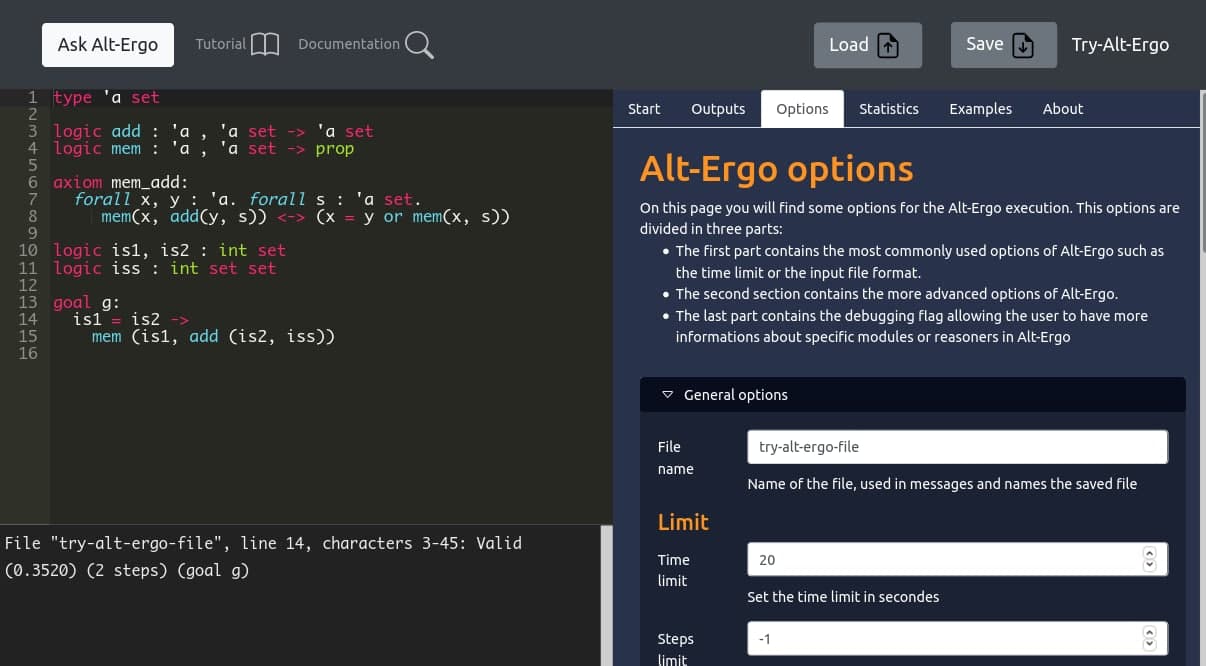 The Try-Alt-Ergo has been completely reworked and we added some features: 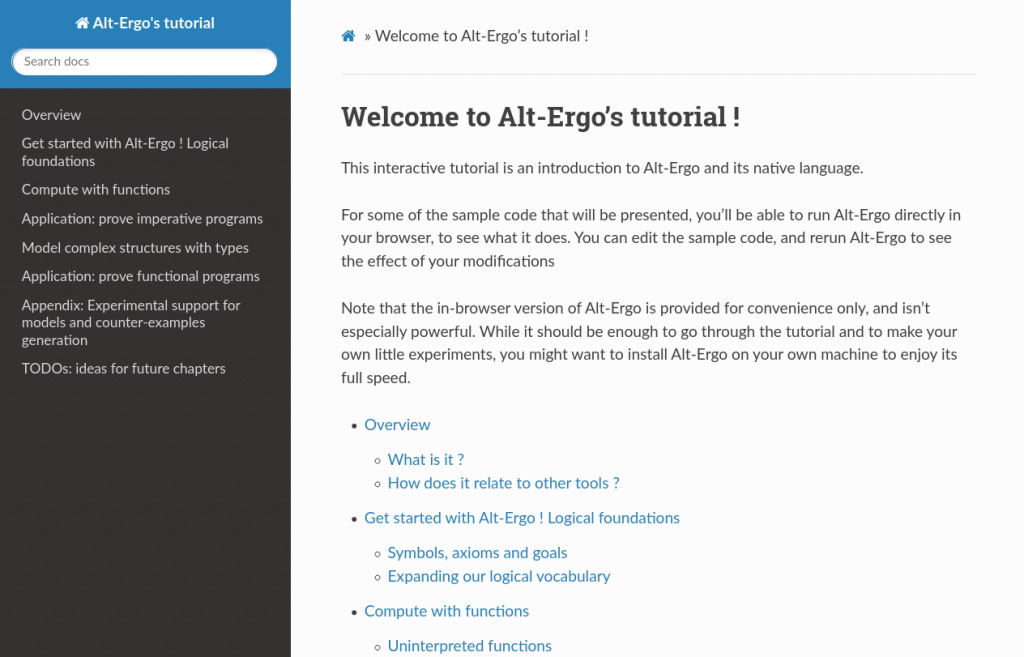 We hope you will enjoy this new version of Try-Alt-Ergo, we can't wait to read your feedback!

This work was done at OCamlpro.

Alt-Ergo is an open-source automatic solver of mathematical formulas designed for program verification. Alt-Ergo is very successful for proving formulas generated in the context of deductive program verification. It was originally designed and tuned to be used by the Why playform. Its development started in 2006 at the Laboratoire de Recherche en Informatique (LRI) of the Université Paris Sud and is maintained, developed and distributed since 2013 by the company OCamlPro.

Alt-Ergo is part of the formal method team here at OCamlPro. This work is partially funded by the research projects Soprano, BWare, Vocal and LCHIP. If you like Alt-Ergo, consider joining the Alt-Ergo user’s Club