Liquidity Tutorial: A Game with an Oracle for Random Numbers


A Game with an oracle

In this small tutorial, we will see how to write a chance game on the Tezos blockchain with Liquidity and a small external oracle which provides random numbers.

Principle of the game

Rules of the game are handled by a smart contract on the Tezos blockchain.

When a player decides to start a game, she must start by making a transaction (i.e. a call) to the game smart contract with a number parameter (let's call it n) between 0 and 100 (inclusively). The amount that is sent with this transaction constitute her bet b.

A random number r is then chosen by the oracle and the outcome of the game is decided by the smart contract.

Architecture of the DApp

Everything that happens on the blockchain is deterministic and reproducible which means that smart contracts cannot generate random numbers securely 1 . 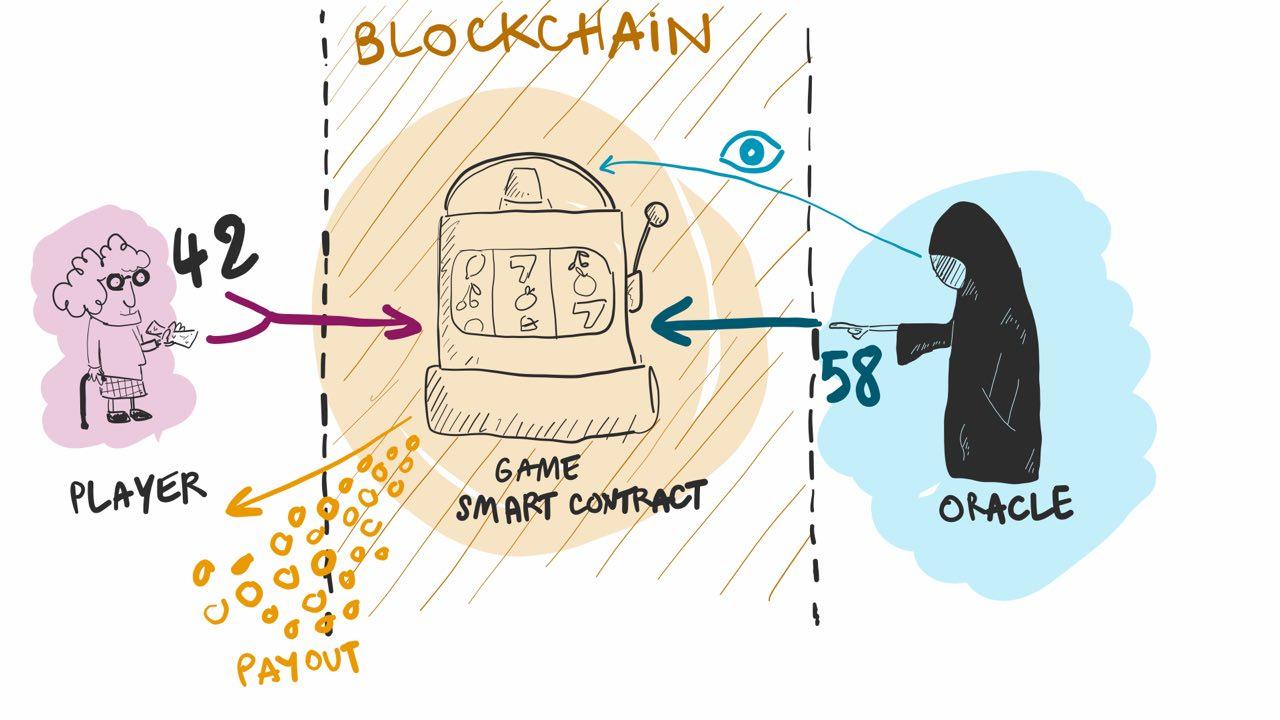 Because the oracle waits for a play transaction to be included in a block and sends the random number in a subsequent block, this means that a game round lasts at least two blocks 2 .

This technicality forces us to split our smart contract into two distinct entry points:

The smart contract game manipulates a storage of the following type:

The storage contains the address of the oracle, oracle_id. It will only accept transactions coming from this address (i.e. that are signed by the corresponding private key). It also contains an optional value game that indicates if a game is being played or not.

A game consists in three values, stored in a record:

We also give an initializer function that can be used to deploy the contract with an initial value. It takes as argument the address of the oracle, which cannot be changed later on.

The first entry point, play takes as argument a pair composed of: - a natural number, which is the number chosen by the player - and a key hash, which is the address on which a player wishes to be payed as well as the current storage of the smart contract.

The first thing this contract does is validate the inputs:

The rest of the code for this entry point consist in simply creating a new game record { number; bet; player } and saving it to the smart contract's storage. This entry point always returns an empty list of operations because it does not make any contract calls or transfers.

The new storage is returned and the execution stops at this point, waiting for someone (the oracle) to call the finish entry point.

The second entry point, finish takes as argument a natural number parameter, which is the random number generated by the oracle, as well as the current storage of the smart contract.

Smart contracts are public objects on the Tezos blockchain so anyone can decide to call them. This means that permissions must be handled by the logic of the smart contract itself. In particular, we don't want finish to be callable by anyone, otherwise it would mean that the player could choose its own random number. Here we make sure that the call comes from the oracle.

We must also make sure that a game is currently being played otherwise this random number is quite useless.

The rest of the code in the entry point decides if the player won or lost, and generates the corresponding operations accordingly.

If the random number is smaller that the chosen number, the player lost. In this case no operation is generated and the money is kept by the smart contract.

Otherwise, if the random number is greater or equal to the previously chosen number, then the player won. We compute her gain and the reimbursement value (which is her original bet + her gain) and generate a transfer operation with this amount.

Finally, the storage of the smart contract is reset, meaning that the current game is erased. The list of generated operations and the reset storage is returned.

At anytime we authorize anyone (most likely the manager of the contract) to add funds to the contract's balance. This allows new players to participate in the game even if the contract has been depleted, by simply adding more funds to it.

This code does nothing, excepted accepting transfers with amounts.

The oracle can be implemented using Tezos RPCs on a running Tezos node. The principle of the oracle is the following:

These can be implemented with the following RPCs:

An implementation of a random number Oracle in OCaml (which uses the liquidity client to make transactions) can be found in this repository: https://github.com/OCamlPro/liq_game/blob/master/src/crawler.ml.

Try a version on the mainnet

This contract is deployed on the Tezos mainnet at the following address:KT1GgUJwMQoFayRYNwamRAYCvHBLzgorLoGo, with the minor difference that the contract refunds 1 μtz if the player loses to give some sort of feedback. You can try your luck by sending transactions (with a non zero amount) with a parameter of the form Left (Pair 99 &quot;tz1LWub69XbTxdatJnBkm7caDQoybSgW4T3s&quot;) where 99 is the number you want to play and tz1LWub69XbTxdatJnBkm7caDQoybSgW4T3s is your refund address. You can do so by using either a wallet that supports passing parameters with transactions (like Tezbox) or the command line Tezos client:

Alain Mebsout: Alain is a senior engineer at OCamlPro. Alain was involved in Tezos early in 2017, participating in the design of the ICO infrastructure and in particular, the Bitcoin and Ethereum smart contracts. Since then, Alain has been developing the Liquidity language, compiler and online editor, and has started working on the verification of Liquidity smart contracts. Alain also contributed some code in the Tezos node to improve Michelson. Alain holds a PhD in Computer Science on formal verification of programs.

Hello Mr. Alain Mebsout. My name is Milfont and I am the author of TezosJ SDK library, that allows to interact with Tezos blockchain through Java programming language.I did’t know this game before and got interested. I wonder if you would like me to create an Android version of your game, that would be an Android APP that would create a wallet automatically for the player and then he would pull a jackpot handle, sending the transaction with the parameters to your smart contract. I would like to know if you agree with this, and allow me to do it, using your already deployed game. Thanks in advance. Milfont. Twitter: @luizmilfont

I just played the game you designed, the problem is I cannot get any feedback even that 1utz for losing the game. Is the game retired? If so, can anyone help to remove it from tzscan dapps page: https://tzscan.io/dapps. Also, by any chance I may get the tezzies back…

Many thanks! Best regards, Michshell