In this blog post, we explain how ocp-memprof helped us identify a piece of code in Alt-Ergo that needed to be improved. Simply put, a function that merges two maps was performing a lot of unnecessary allocations, negatively impacting the garbage collector's activity. A simple patch allowed us to prevent these allocations, and thus speed up Alt-Ergo's execution.

Il all started with a challenging example coming from an industrial user of Alt-Ergo, our SMT solver. It was proven by Alt-Ergo in approximately 70 seconds. This seemed abnormnally long and needed to be investigated. Unfortunately, all our tests with different options (number of triggers, case-split analysis, …) and different plugins (satML plugin, profiling plugin, fm-simplex plugin) of Alt-Ergo failed to improve the resolution time. We then profiled an execution using ocp-memprof to understand the memory behavior of this example.

Profiling an Execution with ocp-memprof

As usual, profiling an OCaml application with ocp-memprof is very simple (see the user manual for more details). We just compiled Alt-Ergo in the OPAM switch for ocp-memprof (version 4.01.0+ocp1) and executed the following command:

The execution above triggers 612 garbage collections in about 114 seconds. The analysis of the generated dumps produces the evolution graph below. We notice on the graph that:

We are not able to precisely identify the allocation origins of the maps in this graph (maps are generic structures that are intensively used in Alt-Ergo). To investigate further, we wanted to know if some global value was abnormally retaining a lot of memory, or if some (non recursive-terminal) iterator was causing some trouble when applied on huge data structures. For that, we extended the analysis with the --per-root option to focus on the memory graph of the last dump. This is done by executing the following command, where 4242 is the PID of the process launched by ocp-memprof --exec in the previous command: 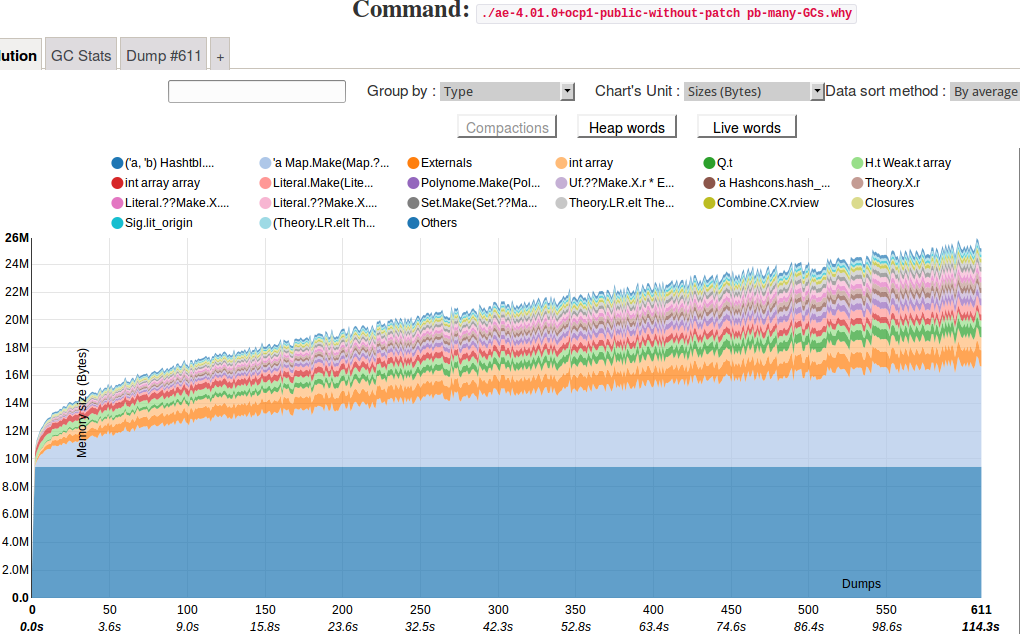 The per-root graph (above, on the right) gives more interesting information. When expanding the stack node and sorting the sixth column in decreasing order, we notice that:

This information allows us to see the precise origin of the allocation: the map of module LX used in uf.ml. Lucky us, there is only one fold function of LX's maps in the Uf module with the same type.

Thanks to the information provided by the --per-root option, we identified the code responsible for this behavior:

Roughly speaking, the function above retrieves two maps nq_r1 and nq_r2 from env, and folds on the first one while providing the second map as an accumulator. The local function merge_disjoint_maps (passed to fold) raises Exception.Inconsistent if the original maps were not disjoint. Otherwise, it adds the current binding (after updating the corresponding value) to the accumulator. Finally, the result mapl of the fold is used to update the values of r1 and r2 in env.neqs.

After further debugging, we observed that one of the maps (nq_r1 and nq_r2) is always empty in our situation. A straightforward fix consists in testing whether one of these two maps is empty. If it is the case, we simply return the other map. Here is the corresponding code:

Of course, a more generic solution should not just test for emptiness, but should fold on the smallest map. In the second patch below, we used a slightly modified version of OCaml's maps that exports the height function (implemented in constant time). This way, we always fold on the smallest map while providing the biggest one as an accumulator.

Checking the Efficiency of our Patch

Curious to see the result of the patch ? We regenerate the evolution and memory graphs of the patched code (fix 1), and we noticed: 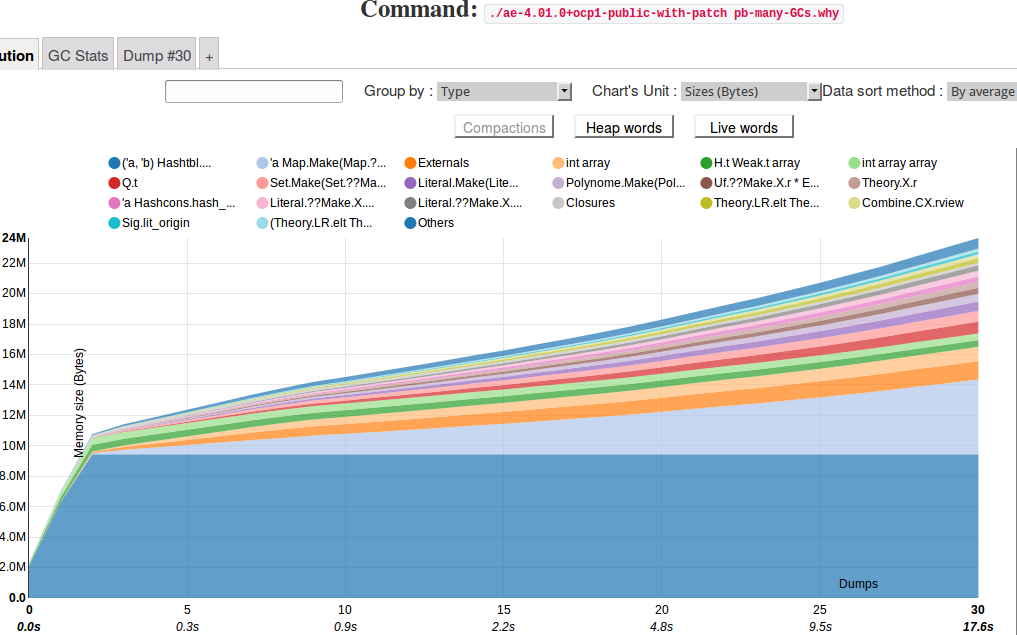 We show in this post that ocp-memprof can also be used to optimize your code, not only by decreasing memory usage, but by improving the speed of your application. The interactive graphs are online in our gallery of examples if you want to see and explore them (without the patch and with the patch).

Do not hesitate to use `ocp-memprof` on your applications. Of course, all feedback and suggestions are welcome, just [email](mailto:contact@ocamlpro.com) us !