Cumulus and ocp-memprof, a love story


In this blog post, we went on the hunt of memory leaks in Cumulus by using our memory profiler: ocp-memprof. Cumulus is a feed aggregator based on Eliom, a framework for programming web sites and client/server web applications, part of the Ocsigen Project.

First, run and get the memory snapshots

To test and run the server, we use ocp-memprof to start the process:

There are several ways to obtain snapshots:

Here, we use the default behavior and get a snapshot after every GC.

After running the server for a long time, the server process shows an unusually high consumption of memory. ocp-memprof automatically generates some statistics on the application memory usage. Below, we show the graph of memory consumption. On the x-axis, you can see the number of GCs, and on the y-axis, the memory size in bytes used by the most popular types in memory.

Eliom expert users would quickly identify that most of the memory is used by XML nodes and attributes, together with strings and closures.

Unfortunately, it is not that easy to know which parts of Cumulus source code are the cause for the allocations of these XML trees. These trees are indeed abstract types allocated using functions exported by the Eliom modules. The main part of the allocations are then located in the Eliom source code.

Generally, we will have a problem to locate abstract type values just using allocation points. It may be useful to browse the memory graph which can be completely reconstructed from the snapshot to identify all paths between the globals and the blocks representing XML nodes.

From roots to leaking nodes

The approach that we chose to identify the leak is to take a look at the pointer graph of our application in order to identify the roots retaining a significant portion of the memory. Above, we can observe the table of the retained size, for all roots of the application. What we can tell quickly is that 92.2% of our memory is retained by values with finalizers.

Below, looking at them more closely, we can state that there is a significant amount of values of type:

Probably, these finalizers are never called in order to free their associated values. The leak is not trivial to track down and fix. However, a quick fix is possible in the case of Cumulus.

Identifying the source code and patching it

After further investigation into the source code of Cumulus, we found the only location where such values are allocated:

The function of_react takes an optional argument ~scope to specify the way that Eliom_comet.Channel.create has to use the communication channel.

Changing the default value of the scope by another given in Eliom module, we have now only one channel and every client use this channel to communicate with the server (the default method created one channel by client).

After patching the source code, we recompile our application and re-execute the process as before. Below, we can observe the new pointer graph. By changing the default value of scope, the size retained by finalizers drops from 92.2% to 0% !

The new evolution graph below shows that the memory usage drops from 45Mb (still growing quickly) for a few hundreds connections to 5.2Mb for thousands connections. 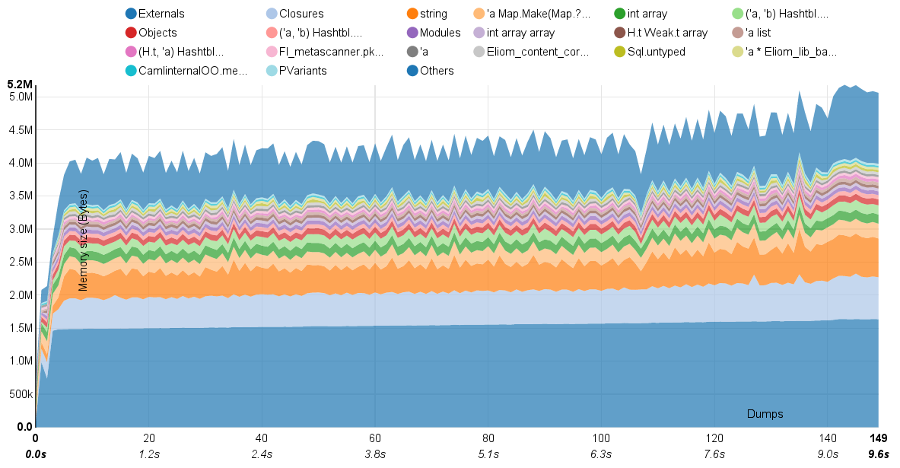 As a reminder, a finalisation function is a function that will be called with the (heap-allocated) value to which it is associated when that value becomes unreachable.

This example is online in our gallery of examples if you want to see and explore the graphs (with the leak and without the leak).

Do not hesitate to use ocp-memprof on your applications. Of course, all feedback and suggestions on using ocp-memprof are welcome, just send us a mail ! More information: